Balenciaga is a luxury fashion house that was founded in 1919 and, since its inception, it was tied with the elite. During the 1960s, the brand’s most enthusiastic clients were elite socialites such as Mona von Bismarck and Pauline de Rothschild (the wife of Baron Philippe de Rothschild).

In the 21st century, Balencia became a “must” in celebrity circles – especially with pawns of the elite. Its list of clients includes the likes of Madonna, Nicole Kidman, Jennifer Garner, Justin Bieber, and Kim Kardashian.

In short, Balenciaga is “by the elite, for the elite”. And, in case you haven’t realized yet, today’s elite is completely obsessed with the sexualization of children. They’re using schools, mass media, and everything in between to normalize their sickness and, slowly but surely, push the boundaries of what is socially acceptable.

Since Balenciaga is part of this mess, the brand could not help but to contribute to this culture that constantly seeks to sexualize children and, even sicker, to actually celebrate their abuse. Why would they even think of doing that? Short answer: A whole lot of them are pedophiles. Even worse, the occult elite engages in the systematic abuse of children for aims that are too evil to even fathom.

It is only by understanding these facts that the following pictures will make complete sense. Through symbolism, Balenciaga celebrates an entire culture – one that is deeply sick, cruel, and horrific.

The pictures promoting Balenciaga’s “holiday” products are unsettling and, with a deeper analysis of the smaller details, it only gets worse.

In this picture, a girl stands on a bed while holding a plush toy bag in bondage gear.

With that being said, why is a child holding this thing?

This stuffed animal represents a literal sex slave, as symbolized by the collar and padlock.

Notice that the definition above mentions “pet-like status, especially when worn with a leash”. Coincidentally enough, there’s an actual leash on the girl’s bed. And I don’t see a dog in sight. 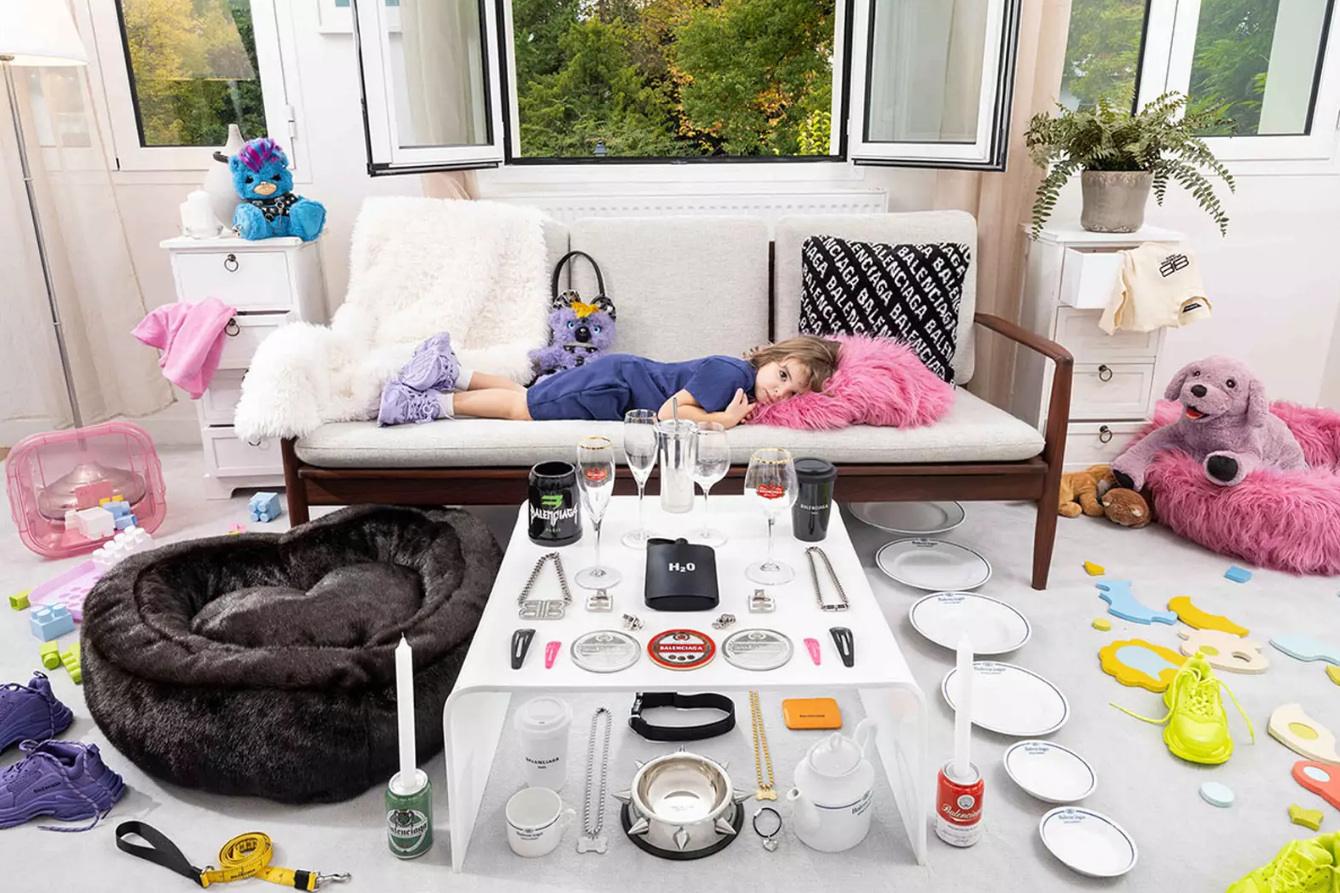 This girl doesn’t seem alright. At all.

In short, the entire vibe of the picture is unsettling and full of inuendoes. Somehow, the one below manages to be worse. 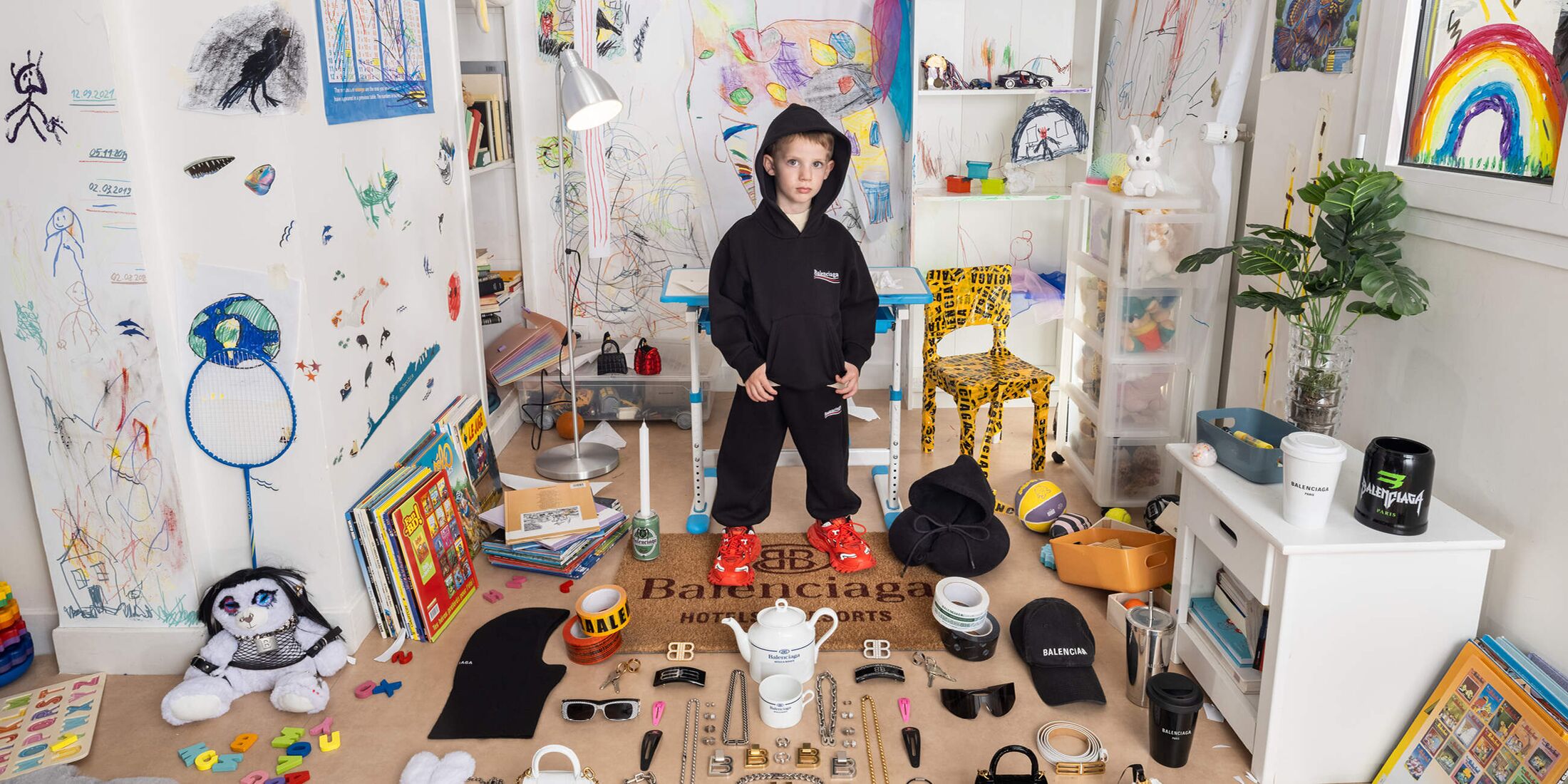 Everything about this picture screams out “abuse”.

First, there’s caution tape on a chair. That kind of tape is usually used at crime scenes. Is this boy’s room a crime scene? Did abuse occur here?

Furthermore, the drawings on the walls would most likely cause child psychologists to be deeply concerned. 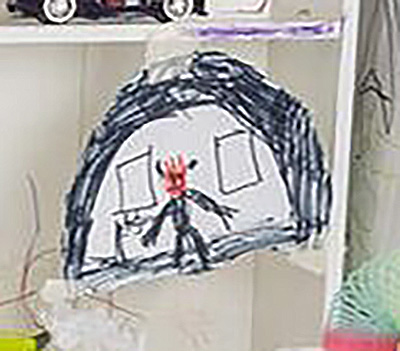 In the background, there’s a drawing of an evil-looking horned figure.

This entire wall is full of drawings that convey the fact that this child is sad and disturbed. 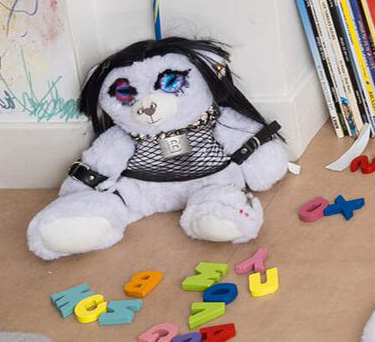 Of course, there’s this cursed thing sitting next to kiddie toys. This juxtaposition perfectly reflects an obsession of the elite: Spoiling children’s innocence.

In the past, Balenciaga made it a point to associate these stuffed animals with full-on abuse. 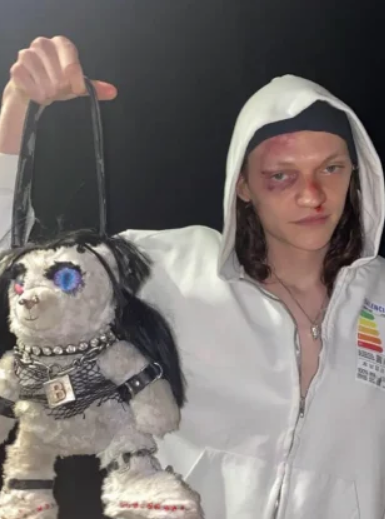 In fashion shows, bruised-up models carried around these stuffed animals which were purposely dirtied-up to make things even creepier.

The photoshoot above was the work of Gabriele Galimberti, an Italian photographer who is loved by the elite. Because he pushes its agendas. 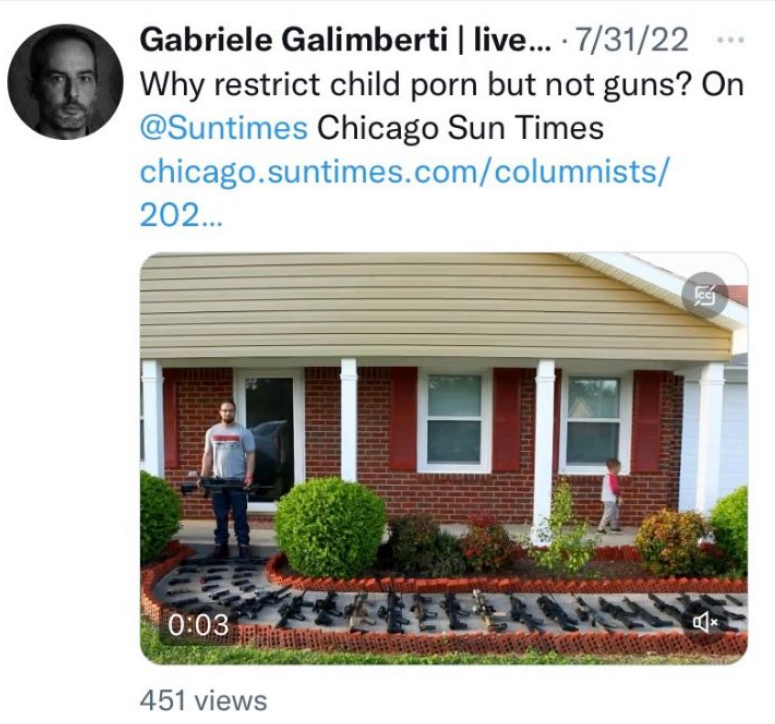 Some Balenciaga pictures do not contain children. However, they contain details that go exactly in the same direction as the pictures above, even confirming our worst fears. 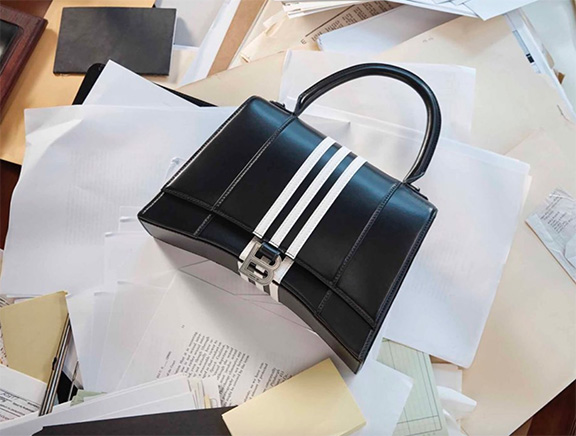 One picture features a handbag casually placed on some documents. 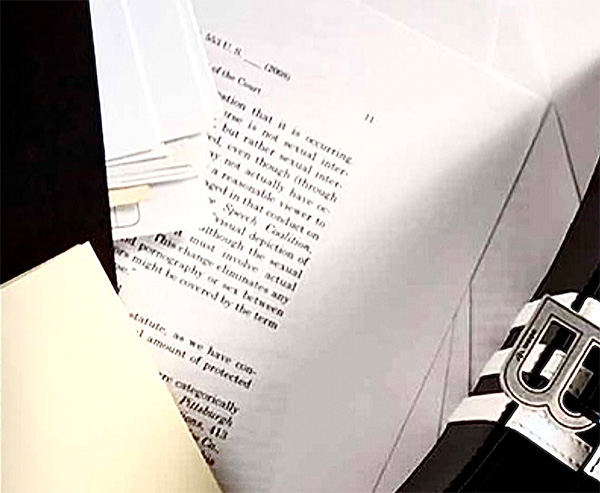 This specific ruling was not chosen by mistake. It fits perfectly the insane child abuse theme of the Balenciaga campaign. Indeed, Ashcroft v. Free Speech Coalition reverses a significant portion of the Child Pornography Prevention Act of 1996.

A provision of the Child Pornography Prevention Act of 1996 (CPPA) (18 USCS 2252A(a)) prohibited the possession or distribution of “child pornography,” which was defined in another CPPA provision (18 USCS 2256(8)(B)) as including any visual depiction that “is, or appears to be, of a minor engaging in sexually explicit conduct.” Thus, 2256(8)(B) banned a range of sexually explicit images, sometimes called “virtual child pornography,” that appeared to depict minors but were produced by means other than using real children, as, for example, computer-generated images and images of adults who looked like minors.
– LexiNesis, Ashcroft v. Free Speech Coalition

The Supreme Court ruled that the ban on “virtual child pornography” violated free speech so it was reversed. In other words, it was a win for the pedos. And that’s why this specific document was in that Balenciaga photo. They want more judicial victories. 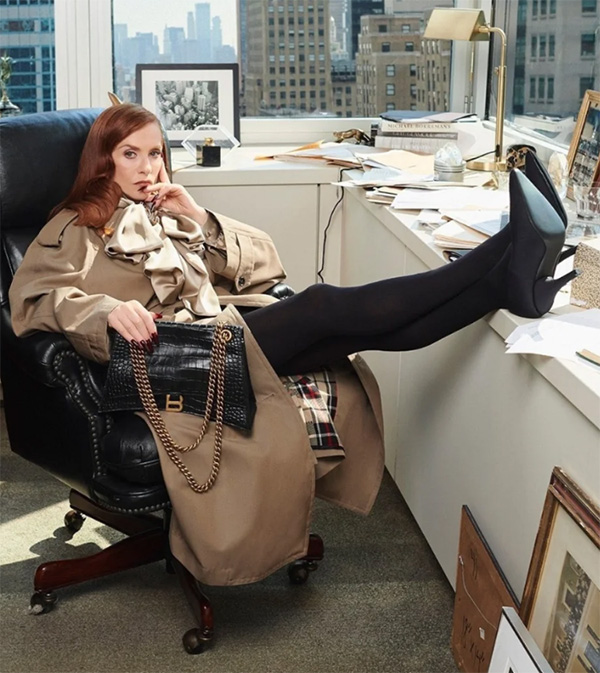 The devil is in the details. 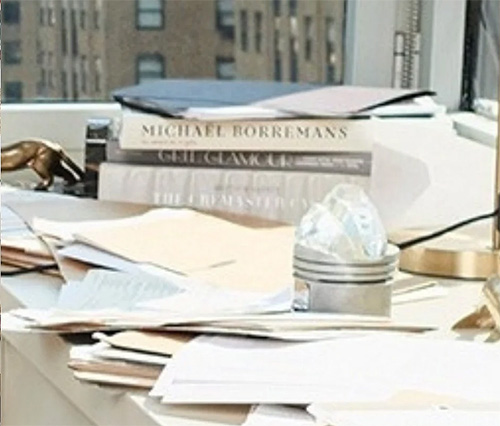 The book on top of the stack: Michael Borremans.

Once again, the presence of this book is not random. It perfectly fits the overarching theme. Michael Borremans’ most famous work is titled Fire From the Sun. 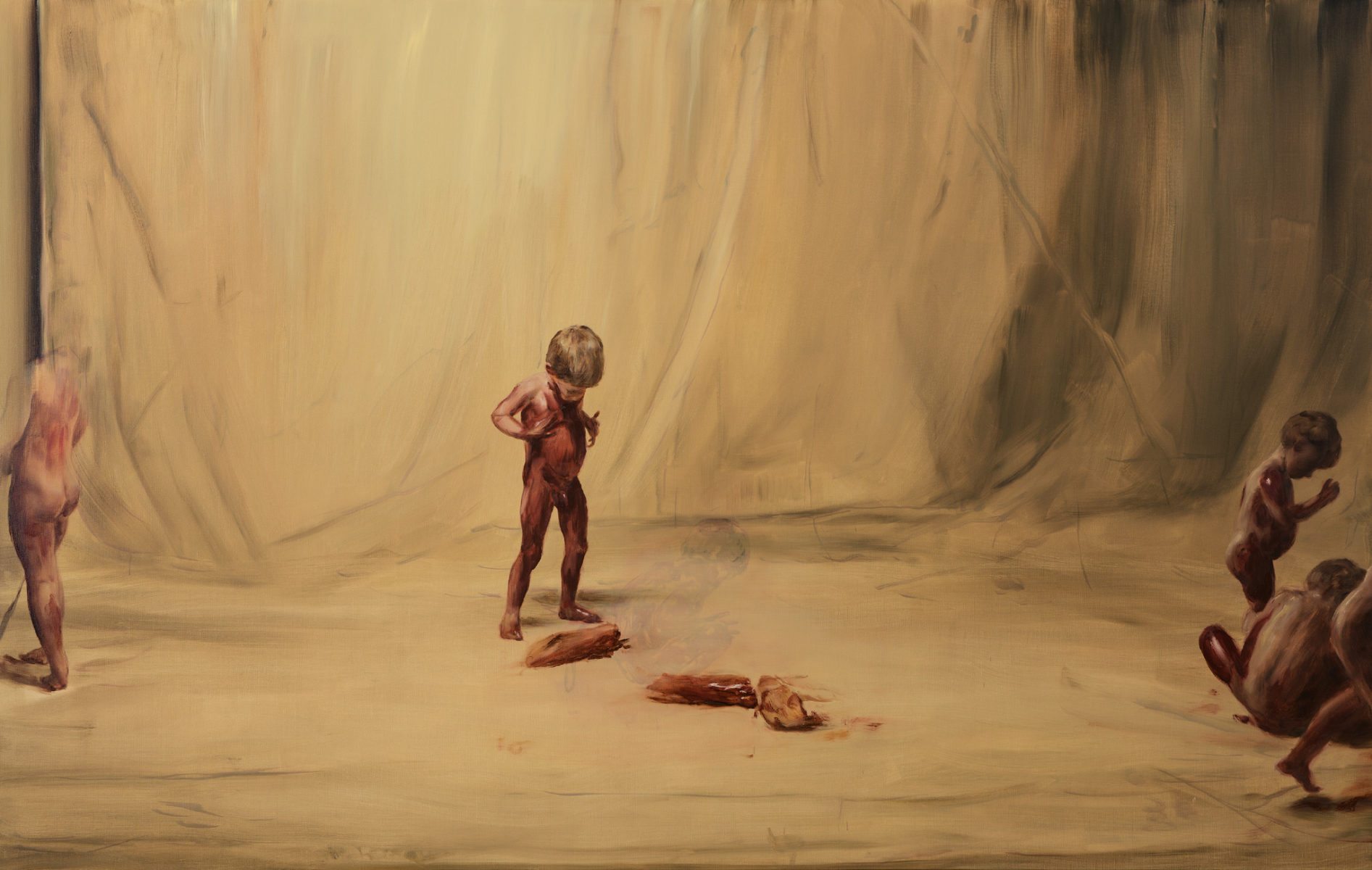 In the painting above, we see naked children that are covered in blood and three limbs on the floor. If you look closely, above the limbs, we see a translucent figure crouching above the limbs. Kim Noble, a survivor of trauma-based mind control who paints symbolic images, uses the same imagery to depict the concept of dissociation (used in mind control). In other words, these children are being traumatized and they’re dissociating.

Here’s a description of this series of paintings.

In the most evident terms, Fire From The Sun portrays children aged two or three in various stages of play with fire and what appear to be human limbs, even hair. The children are all light-skinned Sistine-style cherubs, sometimes covered in blood. The children do not appear to be distressed or disturbed (though some viewers at the gallery may be). The drama of the paintings is heightened by their visual connection to each other—and, more broadly, to older works by Borremans. The scene in each painting is composed against a similar beige backdrop. This is a set or a stage, devoid of context, withholding of answers, but suggestive of a director or someone watching.
– Elephant, Michaël Borremans: Fire from the Sun

As the description above stated, this scene takes place on a stage and is suggestive of a “director” watching. This is truly psychopathic. What if these paintings were based on something that happened in reality? 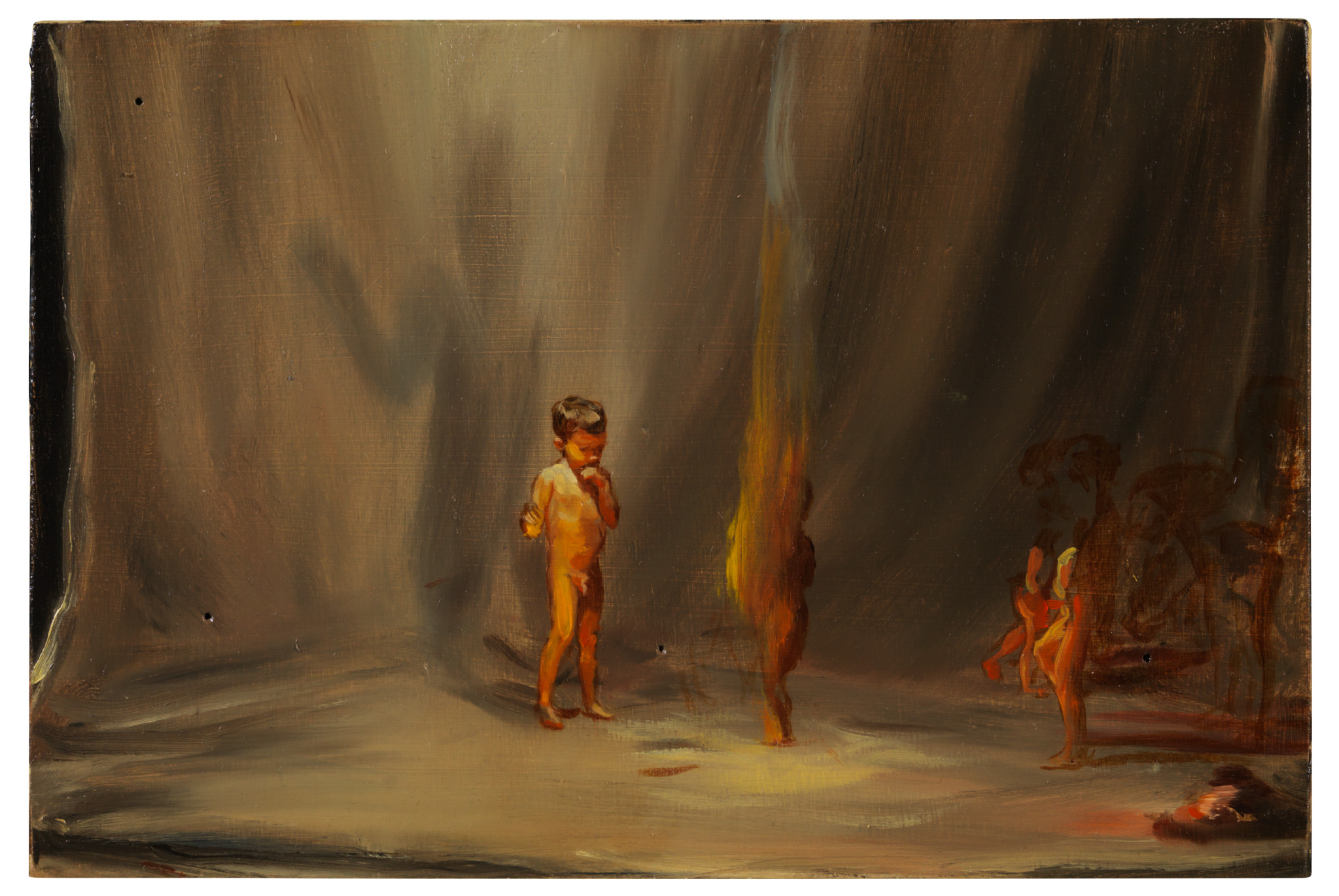 In some of the paintings the children are in the process of disappearing: phantom bodies not quite removed from their gruesome acts. Importantly, Borremans chose to depict children too young to have clear memories. In some fictional future, they might be unreliable carriers of this formative origin story or trauma.
– Ibid.

The description above, from an art website, actually refers to the trauma of children – a core concept of Monarch programming. 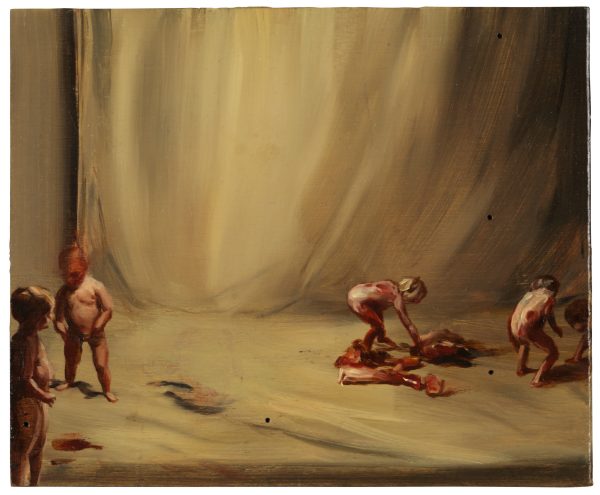 Children play with limbs and eat them.

While the fire and (probable) cannibalism imply some sort of ritual, the works are most chilling as sketches of random violence, causal and instinctual. The depicted characters break with one typecast (angelic) while fitting another (demonic).
– Ibid. 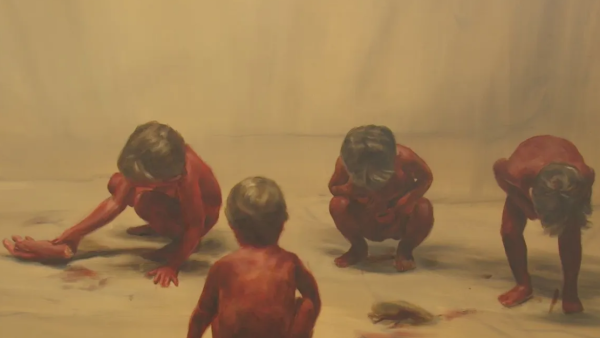 Cannibalism is another obsession of the elite.

Some paintings are completely ritualistic. 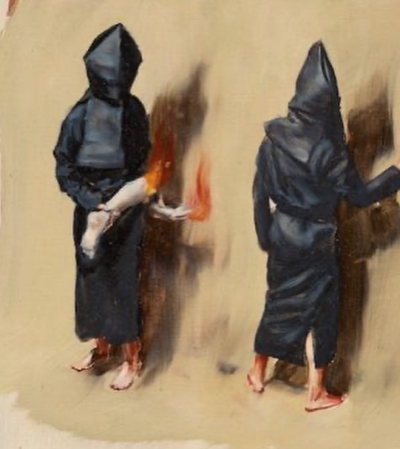 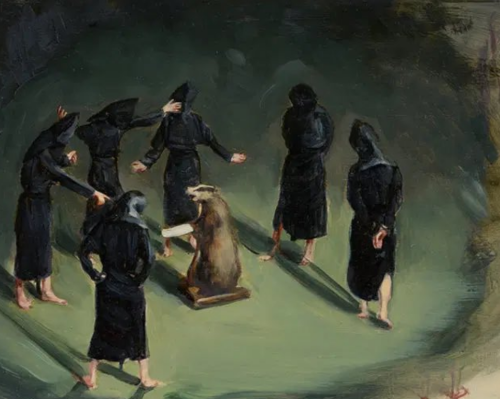 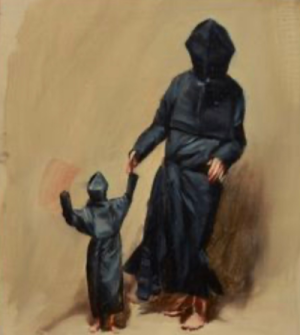 I could post pictures all day but I believe you get the picture. Borremans’ work revolves around trauma, abuse, rituals, cannibalism, and a whole lot of naked children being watched by some freak. In other words, this is all about the sickness of the occult elite. And this is why his book was featured in the Balenciaga pic.

Following the controversy around this madness, Balenciaga issued an apology. That was probably part of the plan from the get go. In past years, I documented other major companies releasing ridiculous, pedophilic pictures to then “apologize” (i.e. Zara’s suggestive photoshoot with a child model).

However, that apology is completely worthless. It doesn’t erase the fact that several adults knowingly worked on these pictures while several others approved them. They knew what they were doing. Even if Balenciaga removed all of these pictures, it’s too late. They’re already out there and they know it. The dog whistle was blown.

Balenciaga is a fashion brand “by the elite and for the elite”. They’ve shown their true ugly faces, disseminated their pedophilic culture to the world, and, after some (expected) backlash, they’ve erased everything. Then, mass media rehabilitated them, even going as far as calling those who spotted the insanity conspiracy theorists.

A headline by Highsnobiety.

This is not even close to a “conspiracy theory”, it’s truth staring in our faces. The messages in Balenciaga’s campaign are not random and they’re not a mistake: They are fully in line with the sick culture that’s been described on this site for years.

The silver lining in this horrific mess: People are waking up to this crap and calling it out.

P.S. If you appreciated this article, please consider making a donation. Thank you for your support!

Andreas Moritz on Vitamin B12 – Digestion, Absorption, and Herbivores

We use cookies on our website to give you the most relevant experience by remembering your preferences and repeat visits. By clicking “Accept All”, you consent to the use of ALL the cookies. However, you may visit "Cookie Settings" to provide a controlled consent.
Cookie SettingsAccept All
Manage consent

This website uses cookies to improve your experience while you navigate through the website. Out of these, the cookies that are categorized as necessary are stored on your browser as they are essential for the working of basic functionalities of the website. We also use third-party cookies that help us analyze and understand how you use this website. These cookies will be stored in your browser only with your consent. You also have the option to opt-out of these cookies. But opting out of some of these cookies may affect your browsing experience.
Necessary Sempre abilitato
Necessary cookies are absolutely essential for the website to function properly. These cookies ensure basic functionalities and security features of the website, anonymously.
Functional
Functional cookies help to perform certain functionalities like sharing the content of the website on social media platforms, collect feedbacks, and other third-party features.
Performance
Performance cookies are used to understand and analyze the key performance indexes of the website which helps in delivering a better user experience for the visitors.
Analytics
Analytical cookies are used to understand how visitors interact with the website. These cookies help provide information on metrics the number of visitors, bounce rate, traffic source, etc.
Advertisement
Advertisement cookies are used to provide visitors with relevant ads and marketing campaigns. These cookies track visitors across websites and collect information to provide customized ads.
Others
Other uncategorized cookies are those that are being analyzed and have not been classified into a category as yet.
ACCETTA E SALVA
WP Twitter Auto Publish Powered By : XYZScripts.com